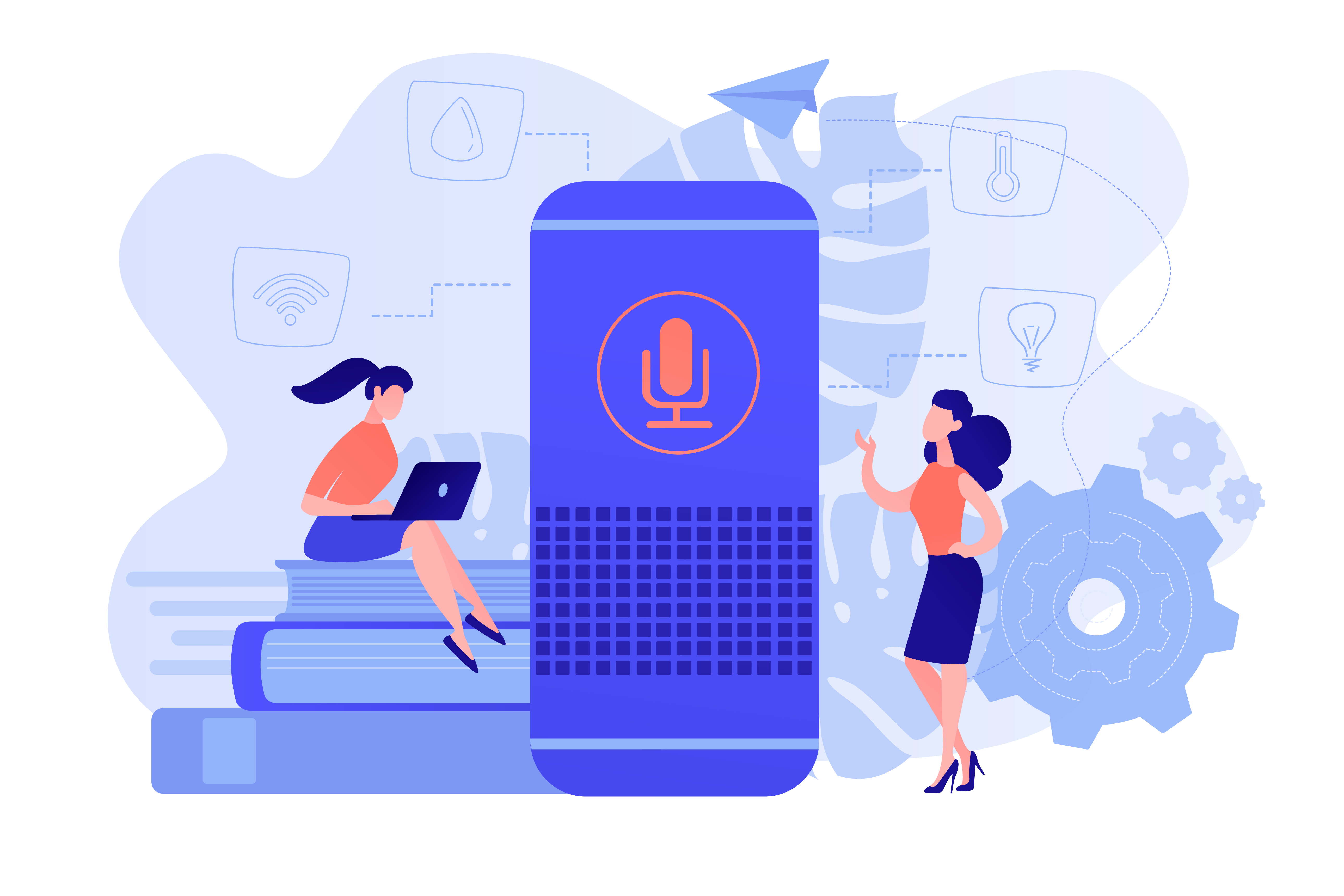 I've been interested by the possibility of AI technology since seeing the first part of Iron Man, as Tony knows all too well with his AI aide Jarvis.

But hey! In real life, not on screen, we are already halfway there.

Remember the first time you used Siri on your iPhone 4S? Wasn't that an incredible sensation? Since then, we've come a long way — Alexa, Google Assistant, Cortona, and a hundred other things.

So, if you're as excited as I am by voice-based AI and want to give it a try, you'll need to brush up on your skills and knowledge of how to create voice user interfaces.

Fortunately, you've come to the correct place. Here's everything you need to know about VUI and why they're so vital in the design of simple app search.

VUI stands for Voice User Interface and refers to the user interface that allows users to communicate with a system using voice commands. Google Assistant, Siri, and Amazon's Alexa are the most popular and top voice user interface examples.

The main advantage of VUIs is that they allow for hands-free and eye-free interaction with a system.

You should apply user-first design when designing VUI, just as you would when building other digital products. The main goal is to acquire information and understand the behaviour and demands of the users, as this is what forms the basis of the product requirements.

At this point, you should concentrate on —

You must define the capabilities and shape the product at this point. This includes the following:

These scenarios should be identified prior to the app's unique ideas in order to be put into a conversational dialogue flow. They're a way of considering why someone might need to use a VUI. As a result, you must create situations that are valuable to your users.

It's sometimes difficult to tell which circumstances are critical and which may be ignored. You can use a use case matrix to examine each of them for this purpose.

What matters most in this case is that the users can solve a specific problem more efficiently than they could with the alternatives. The goal of this step is to identify common and specific cases from which users will benefit.

A few examples include: A. when users are preoccupied and cannot use the visual user interface; and B. when they need to do something quickly. For example, commanding the VUI to "Play some music" takes much less time than doing it manually.

Let us examine these two concepts using the previously mentioned example of "Play some music."

There are two kinds of intents: A. high utility (a very specific and straightforward command, such as "turn on the lights in the living room") and B. low utility (vaguer and hard to decipher). It is a high utility interaction in our case. Utterance is concerned with the various ways in which users can phrase a request. In our case, the alternative to "Play some music" could range from "I want to hear some music" to "can you play a song?" and so on. Variations must be taken into account by all VUI UI/UX designers.

Slots – When intent is insufficient, slots come into play. They refer to the additional information required to provide the best possible results for the query. They could be optional.

The dialogue flow is the solution to the problem of "creating voice interaction between user and technology." The process starts with developing a dialogue flow for each requirement you want to address with your product.

A dialogue flow should cover the following points: main keywords for the interaction, possible branches where the conversation could go, and example dialogues for users and assistants.

In our case, a dialogue flow is simply a prototype that depicts the back and forth conversations between users and voice assistants. For a better understanding, consider the illustrated dialogue flow below.

For VUI, you have several prototyping tools at your disposal. a few of Making up dialogues

The building blocks of voice user flow are a compiled set of dialogues. Here are some ideas for engaging and conversational dialogue:

"Tell me a good place to eat Chinese cuisine," says the user.

"Tell me a good place to eat Chinese cuisine," says the user. "There are several Chinese restaurants nearby; would you like to walk or drive?"

Isn't it better to identify potential errors while creating dialogues than to try to fix the magnified mess later? Here are a few things to avoid at all costs, but keep them in perspective to avoid error states.

Showcase the identity of your company.

Even in human conversations, the tone of voice is extremely important.

Then, your dialogues will become the personality of your product, and they should always leave a positive impression in the minds of users. You must create dialogues that meet the emotional needs of your users, not just dialogues.

You can greatly personalise the user's experience if you use the data at your disposal (all of the conversations your product has with them). For example, if a user says "I want to order noodles," your system should respond with "Would you like to repeat your last order of Hakka noodles from Chopstick?"

4. Put your product to the test

When everything is nearly finished, it is time to test the fruits of your labour. You must put your VUI to the test.

You can divide your target audience into groups and then conduct testing sessions to see how users interact with your product. This is an excellent opportunity to track task completion rates and customer satisfaction scores (CSAT).

Google and Amazon, like other simulators used in mobile app development, provide tools for testing the designed product. You can test the product's Alexa Skill and Google Action in relation to the hardware devices and their settings.

It is now time to observe your app after it has been released to the market. It's time to get into UX analytics. This stage is concerned with analysing how your product is being used by users. It can be extremely difficult

Normally, visual user interfaces have issues that must be addressed as well, but the frustration of a faulty visual interface pales in comparison to that of a VUI. So, if your voice assistant fails to function properly, it will be dropped like a hot potato.

What will assist you in preventing this from happening? – VUI design principles. So let us take a look at them all at once.

In contrast to a visual user interface, users may not be able to become acquainted with the functionalities right away. They might not even know where to begin. In that case, Keep your list of action options as short as possible.

Unless and until you want to overwhelm your user right away, you should make sure that you only provide the most appropriate and basic options.

The verbal content must be as concise and full of meaning as possible, while also being easily understood in one sitting. According to Amazon, when designing voice user interfaces for Alexa mobile apps, no more than three interaction options should be listed. This will also ensure that the VUI has an engaging UX design.

This principle is extremely useful when creating VUIs. You must make your voice app development the best in the industry. If you're creating a voice interaction to start a shop floor machine, the simplest approach would be to assign numbers to each machine and then issue commands like "Start machine 1," etc.

Remember how you feel when there is no activity on a webpage you just opened? Multiply this annoyance in the case of VUI.

It is critical to remember that your user must be informed when the device is actively interacting. You must provide users with queues for when to speak and when to listen to the voice assistant. The image above shows how Google Assistant (with dots forming a wave) and Alexa represent this function.

For example, if the user says "turn off the kitchen lights," your assistant should respond with something like "Kitchen lights turned off." This eliminates the need for the user to check the task done in person, which is the whole point of having a Voice-based AI.

The voice-based interface, like everything else, has an Achilles' heel. In reality, there are several. So, what are they?

Users are concerned because these voice-based AI assistants are constantly waiting in lines while listening to the sounds of their surroundings. The fear of their privacy being violated is also not irrational.

Initially, voice assistants like Alexa saved all conversations they encountered, which users see as a major risk of voice AI. A couple's nightmare came true when Alexa was caught sending their secret recordings to a stranger. Some assistants now delete the saved conversations every 24 hours or so. These, however, come at an additional cost and with UI friction.

It becomes difficult for voice UI and UX designers to explain to users. But what if you need to change the meeting's location or time later? "I'm not sure about what you said; would you like me to save this event?" it would respond. To avoid a negative user experience, the AI could simply say, "I'm sorry, I'm still working on adding locations."

Voice UI prototyping and testing is another challenge for designers. Assume you've created a prototype and want to put it through its paces. You've already given users the option to shop for groceries using your voice assistant.

The difficulty begins here: users can express themselves in a variety of ways, making it difficult to keep track of them all. It becomes even more difficult.

Because language is the foundation of voice technology, any voice-based AI must be fluent in both understanding and speaking. Unfortunately, technology has only advanced in a few languages so far. Adding other languages and distinct accents to the interface, however, is still a work in progress.

We are obligated to consider the future prospects of every technology, and voice is no exception. Based on what we've learned from voice interface use cases like Alexa, we know that voice technology integration alone cannot meet users' daily needs.

The best way for it to be fully adopted is to shake hands with the Like Google Assistant and Siri, it has a visual user interface. VUI and visual user interface can compensate for each other's shortcomings, providing users with an exceptional voice assistant experience. Furthermore, this will allow them to perform complex tasks with simple voice commands, which voice interfaces currently lack.

And who knows, by the end of this decade, we might all have our Jarvis and be able to do everything Tony Stark does without a physical display.

VUIs are here to stay and will be incorporated into an increasing number of products in the future. We hope that our blog helped to clear up any confusion you may have had about designing voice user interfaces.

VUIs are here to stay and will be incorporated into an increasing number of products in the future. We hope that our blog helped to clear up any confusion you may have had about designing voice user interfaces. However, if you have any further questions or want to learn more about VUI, please contact our team, and our experts will gladly assist you with innovative solutions.